Long time between blogs but that happens on the road I’m afraid but I’m laid up for a couple days the driving has caught up with me so here is an update on what has been happening on my travels so far wild food wise.

In South Australia on the highway heading up towards Alice Springs I found a massively loaded prickly pear (Opuntia sp.) n couldn’t resists gathering some to eat n they were supper delicious but quite hard to process on the road in the middle of nowhere with no running water to wash the spins off, I did the best I could with what I had n I enjoyed them but word to the wise don’t use your good pig skin gloves to harvest them n hold them to peel because the spines do not come out they stuck rite into the gloves n I had to throw them….. hard lesson so be warned.

Further up the road I found a loaded pomegranate tree at a servo just before the boarder n garbed a small basket full unfortunately I forgot about the boarder quarantine n had to get rid ov or use them before I crossed the boarder and I was gonna make a drink out of the seeds but they were not ripe they were to astringent to use n I was very disappointed indeed that bloody quarantine has relieved me over the years of some gorgeous fresh produce the one that still stings is the last time I crossed I lost my beautiful organic home grown garlic along with some other yummy goods, I was not happy.

I had another 2 garlic bulbs from my uncles garden in Tassie this round and was determined not to loose them this time so I camped up for the night just before the boarder and cooked up the garlic n all the fresh cherry tomatoes from my friends place in Daylesford that I had with me n I can tell ya you wouldn’t have wanted me to breath on you for the next few days!!

The good news is I was allowed to keep the large bucket I had of chestnuts (Aesculus sp.) n the smaller basket of acorns (Quercus sp.) I had collected in Victoria, I was really happy for that I thought I would loose them all.

Once in central Australia just before Alice Springs I camped up in a nice spot n decided it was such a nice night I would have a camp fire n enjoy the night sky. I got the chestnuts out which I had earlier back down the road at another stop peeled the prickly husks off, I took a knife to these n split their brown shell with a cross so they wouldn’t explode on me I then put them on the coals turning them so as not to burn it was hot work. They were ok but I just don’t get the attraction to having them roasted because they are much nicer put into a stew n slow cooked they have a nicer flavor n texture this was, I think it must be like a traditional thing.
I also put the acorns on the coals to pop their shells which I then peeled off, I have pickled these which I have never done before n I’m hoping they will turn out nice I want the smokiness of the fire n the slight roasting to come through in the flavor, I will let you know how they go. 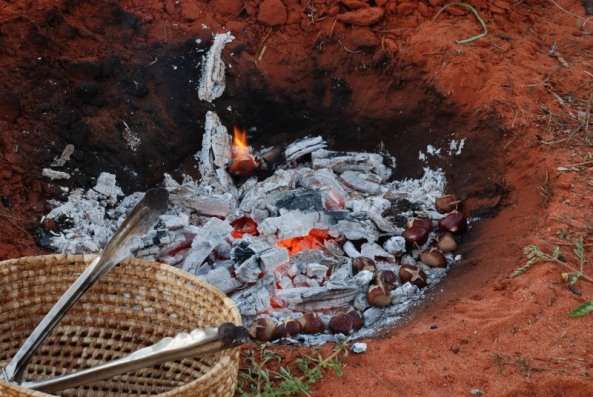 That evening before I set up camp when I first pulled up I had to walk out the back aches n stiffness from all the driving it has been so exiting being on the road again heading toward warmer weather that I got a bit carried away n have done to much at once. anyway I was wondering around the area n I came across these fungi popping their heads up out of the red dirt in the middle of the desert, fungi never cease to amaze me n this tough little guy is Podaxis pistillaris. He is a relative ov the puff ball n there was only a few there so I didn’t kill him to do the usual cut in half pictures n spore print ect to show better ID for everyone I just couldn’t do it.

The next day I arrived in Alice Spring to the delicious smells of slow cooked roaster stew which I could only approve upon by adding some of the peeled chestnuts n accompanying it with stemmed purslane (Portulaca oleracea) which because it had apparently rain flat out for 4 day just before I arrived was every where, the sweetness of the chestnuts against the sourness of the purslane worked like magic in the mouth.
The purslane was the best I had ever seen n tasted it was beautifully young n crisp, I also pickled to large jars full for later enjoyment n I’m sure there will be no lack of this fresh healthy treat on the next leg ov my journey.

That same day my friend Petal came home with a palm trunk that he had removed from someone place n to his amusement I was so exited, I got him to cut it up into like 40 cm sections n then in half long ways to get to the heart of the palm, it was a cocus palm (Syagrus romanzoffiana) n I was pretty sure all palm species hearts were edible, I had never tried palm heart before because you have to kill the plant to get to it.
The heart was beautifully white n very crisp, I cut out as much as I could while Petal n his partner Peachy watched with curiosity, we all had a nibble on it raw n I liked it a lot Petal wasn’t that impressed he thought it was a bit bland n to most it probably is, Peachy liked it too so pretty good results all round n I believe it would be nice in stir fries & or stews ect.

The only problem with it is it oxidized really fast so I went around to my friends back yard n picked some limes to squeeze over it which stopped the browning in it’s tracks, I had some for dinner that night n I pickled the rest the next day I hope it turn’s out nice again I will update.

In picture below from left to right is the pickled palm heart, purslane n the acorns.

Well that’s it for now happy gathering everyone. 🙂

Here is a blog on my first plantain (Plantago sp.) balm it is so exciting, I’m so wrapped I finally got around to doing this I’m so looking forward now to making many many more medicinal balms, I have so any ideas.

I picked n dried the plantain leaves then I crushed them up really finely n put them into a jar with about 1 cup of coconut oil, I sat this in the sun n gave it a good shake everyday for about 10 days. 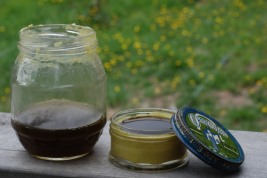 I then strained the oil to remove all the solids then to this I added some melted bees wax I gave this a good stir n poured it into little containers to set. I will use this on skin irritations, burns or stings.

Ok so I’m staying at a friends place for awhile in Daylesford n I’ve been eating the usual suspects everyday dandelions (Taraxacum officinale) plantain (Plantago lanceolata) n dock (Rumex crispus) greens which has been good but the other day I managed to gather a good feed of thistle roots (Cirsium vulgare) the other day I knew my friends hadn’t tried them before so thought it would be a real treat for them n they absolutely loved them. 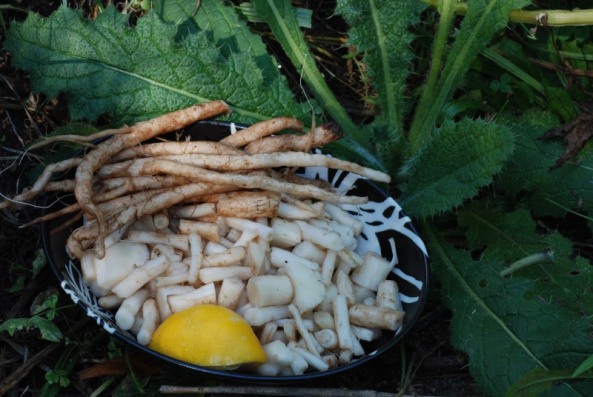 I scraped n cut up into bite size bits then to stop them oxidizing before they were all cut up n ready for the hot plate I put a squeeze of lemon in the water, once ready I simmered these for about an hour until tender I really love their artichoke heart flavor.
The next day we drove around looking for some mushies as it had rained recently we picked a bucket of field mushroom (Agaricus campestris) n a few puff balls (Calvatia sp.). My friends Stu n Nira had theirs with chicken livers fried up for breakfast they really loved them, I’m not a fan of the feildy any more for some reason I’ve gone rite off them I had a few small buttons n some puff balls on toast with an egg. 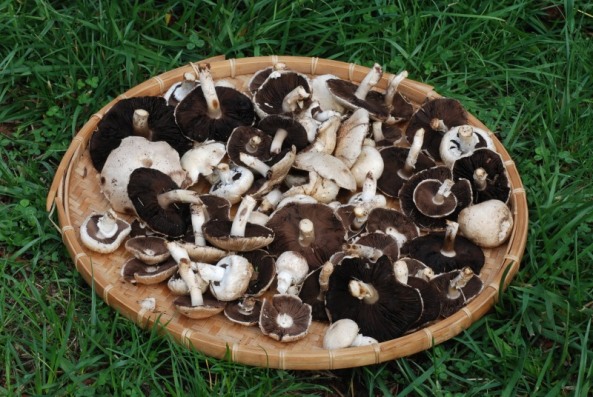 Also some of the fermenting projects we have done, from the left  remember the crab apple cider I was going to make into vinegar well first I had to keep my eye on Stu n Nira coz they would have liked to have drunk all the cider so I wouldn’t have anything to make vinegar with but all good they controlled themselves, I have now strained all of the solids out of this n added some of my home made vinegar with a little mother so now it is just a matter of time lucky I have good self control too.
We also made a new batch of kombucha it is sitting on they bench bubbling away n Nira n I made an apple scrap vinegar for them, we just cut up some apples you can use apple cores and or left overs we also added some grapes you can use any fruits for this that you have around, then we added a sugar syrup to the fruit in that big jar we used about 1 cup of sugar, this will become active n you let it bubble away until it settles a bit then strain the solids out and again wait for the liquid to turn to vinegar, if you have raw vinegar or a vinegar mother you can add these to help speed up the process but they are not necessary it will happen naturally in it’s own good time.

Well that’s it for now hopefully in a couple week we will get many different mushrooms fingers crossed. 🙂