Ok sorry been a bit slack moving back down south has knocked me about a bit my body does not like the cold…..
Anyway I though I would post the last few things I did up north that I didn’t get around to posting.

Here are some pictures of some massive parasol mushrooms (Macrolepiota sp.) I found just before I left, I managed to pick a young one the older ones were massive as big a dinner plates and as you can see from the pictures it wasn’t a pleasant experience the sensitive weed (Mimosa pudica) up north has gotten really bad now and it is become harder to have bare feet in some spots unfortunately I ended up having to carry a pair of old croks in the car with me encase but I had snuk under the fence and was already in the paddock I just wanted to grab n run well hobble fastish for me but check out the look on my face when I landed in a patch of sensitive weed hehehe.

Well I got the mushie home along with some other ones I was interested in and researched them with the parasol I came to the conclusion it was a slender parasol mushroom (Macrolepiota mastoidea) it wasn’t very nice tasting and I was so disappointed because it smelled just like the yummy ones Macrolepiota procera that I pick in Trouwunna/Tasmania but much bigger n I though all my dreams had come true a. 😦

We also got a lot of puff balls (Calvatia cyathiformis) that I have talked about previously.

I don’t normally like to post pictures of myself but my yaba Mick was with me and took these n they are pretty funny so what tha hell here goes enjoy and hopefully I will be back into it in no time 🙂 Ps- they are all phone photos hence the quality. 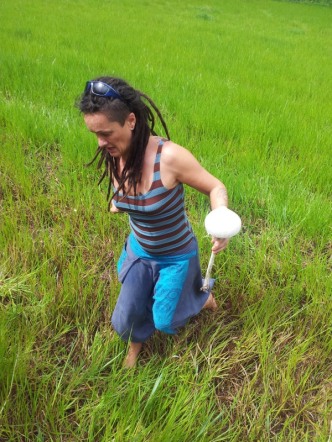 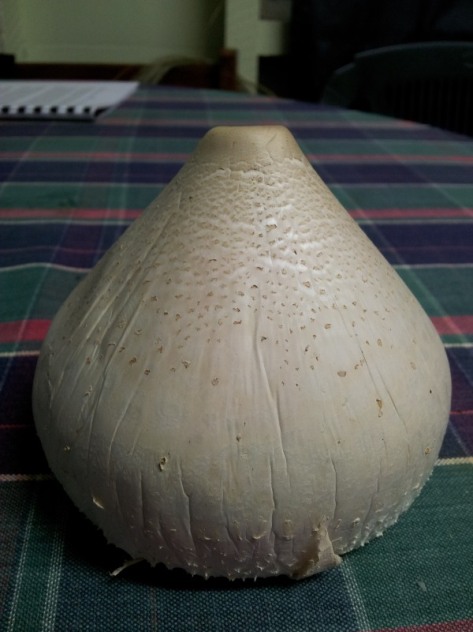 Pictures of the bounty we got that day 🙂

And finally some mayi yaba Mick bought home for me the day before I left the bush passion fruit (passiflora foetida) was so good and the other little ones there I cant remember the name he said but I will ask yaba Mick n add it later they were nice too.

So I bid a sad farewell to my new Kuku Yalanji family n friends and I acknowledge and show respect to the Kuku Yalanji ancestors, elders n all the people for sharing their country with me which has sustained my life for the last 6 months, thank you my heart is filled with joy and I feel blessed. x

Today I want to share one of the many special moments in my life’s journey, some years ago I started eating native wild meats after being a vegan for 14 years, long story not really relevant here, anyway not long into this new journey I had the strong feeling that I had to show the animals as much respect as possible by using every part of them I could to make something special in their honor, so I have been collecting as many good furs as I physically could determined to eventually tan them proppa way with local wattle barks, the furs I collected were from road kill as well as some being shot by my father, this one in the pictures was a mature female that my father shot when I was with him out in the Florentine valley, I am not confident enough to shot myself yet because I don’t want to course undue suffering to the animal I need to be confident of a good head shot.

Over time I collected as many furs as possible I dried some and froze others and it took me awhile to collect enough wattle bark I was hoping for black wattle (Acacia mearnsii) but because it isn’t the common species in my area I had to go with silver wattle (Acacia dealbata), I figured it would be just as good.
My first attempts at preparing the skins properly for keeping haven’t always been successful and I have lost quite a few unfortunately, I lost one lot to mold then moths then a freezer being turned off while I was away ect ect but thing happen when they are supposed to.
Also my first attempts at tanning were no good I had no luck with possum fur at all the fur kept coming off the skin.
I am still determined to tan possum furs because I would love to follow in my great grand fathers foot steps and make a possum fur rug, my Pa made a possum fur rug for each of his children and he had a lot of children with each rug having at least 100 possum furs in it, as a child I used to love patting the rug like it was still alive and I loved how it felt on my cheeks when I snuggled into it.
But back to the wallaby, I was running out of time in the end so I just picked the best two skins I had, I had just enough time to start the tanning process before I left home in April. 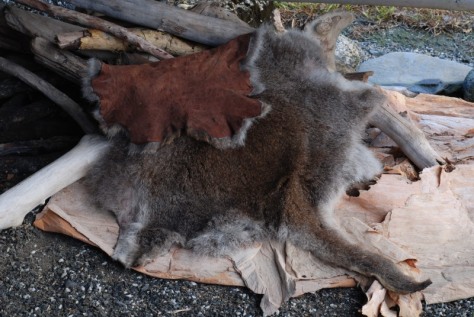 I dried the skins scrapped off any excess loose skin trimmed them up and soaked them in the bark solution and with in two days they started to turn a gorgeous pink color that darkened over time to a flesh reddy brown color. I had to stir the skins at least once a day which I had to do on the road by then as had left home. The smell wasn’t the most pleasant of smells in a confined space so I used an airtight container and sat it outside of the van whilst travelling around before I actually left the state.

After I felt they were ready about 3 weeks I removed them from the solution tacked them out again and dried them in the sun just in time to leave the state to head north, along the way I worked the skins when I felt up to it, by work I mean you have to break the skin because it goes really hard after the tanning and drying I did this by scrunching handful’s and rubbing the skin vigorously together until it softened I also rubbed coconut oil into the skin as I went along, it is hard bloody work I can tell ya and it has taken me months to actually get one of the skins soft and subtle enough to call finished, I then had to comb the fur until all the loose skin on the fur side was removed and the fur was all plumped up and even though I’m saying finished because I’m a perfectionist it could still be worked and oiled more.
This whole process/journey has been very special and empowering and the joy of giving it to my yaba/brother Mick in valuable, my first skin I finished was always going to be a gift to him, I gave it to him the day I left to head back to Torwunna/Tasmania for the summer & autumn months.
One day I hope to have enough to make him a full cloak and I am hoping this will go to his gran in the future.
This whole process has taught me so much and given me so much pride not an egotistical pride but something deeper, I feel my spirit and understanding of self  has taken the same journey as the skin in a way from hard and rough to more soft and subtle, so subtle people will probably not recognize it 🙂

I have permission to share the pictures of yaba Mick but please respect them, Thanks. 🙂

Ok I’m sharing another album of pictures these were all found in either the Port Douglas or Whyanbeel area along river banks and roads sides, as I cant walk very far most days I find a lot of my mayi/food driving along roads very slowly, my legs n back don’t get sore this way but my neck sure does! We used to call tourist swivel necks not sure what I would be classes as but I think most people assume I’m a bloody tourist driving slow so they just blow me off and go around me which is fine by me.

Again I hope you enjoy.

Bell fruit (Syzygium sp.) Not sure on exact species this is bigger than the last one I showed and taste nicer.

Puff ball (Cavatia sp.) (Edible) not 100% sure on species it look like the it could be Calvatia cyathiformis but the spore don’t look “purple” to me so not sure. Anyway they are edible. 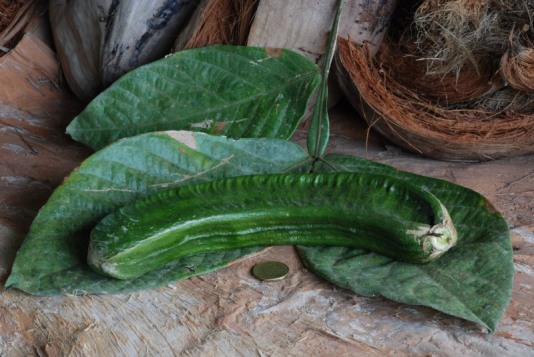 Ice Cream Bean (Inga feuilleei) (Edible) Not 100% on this species. 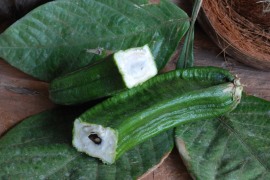 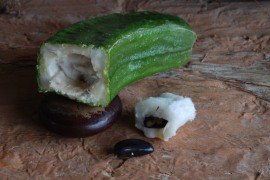 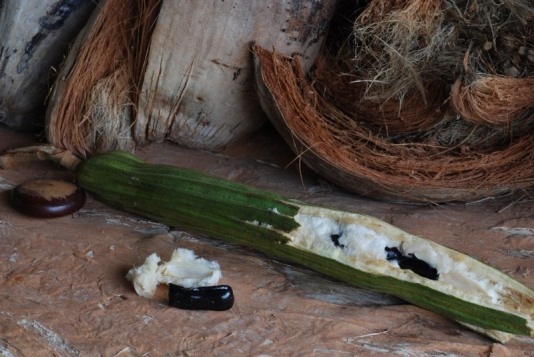 The ice cream beans were very much alike n have a very unusual taste, yes a bit like ice cream hence the name 🙂