Wow what a day I went to town to do a bit of shopping and I didn’t get home until nearly dark and with a wagon full of free food!
It was very unexpected I wasn’t sure what was going to be ready I was hoping the acorns would be but I thought the rest wouldn’t be ready for another coupler weeks especially the fungi they are nearly a month early. 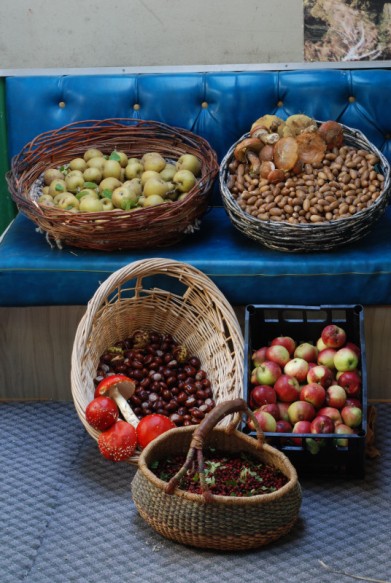 Ok so the first thing I foraged was the acorns (Quercus sp.) there are a few big trees outside the council chambers in the town where I was and I asked inside at the desk if I could have some of their acorns and with funny quizical looks they said yes, take as many as you want, what are you going to do with them? eat them I said and trotted out to rake the goodies up. Happy I finally got some as they are 2 month late and I didn’t think I was going to get any this year. 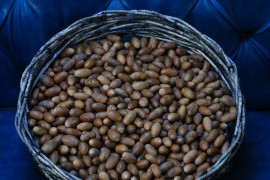 Next was a trip down to the esplanade to check my favorite Hawthorns (Categus sp.) thought they may be a coupler weeks off but no they were ready for the picking, the birds were certainly into them so I picked about 5 kg before my back had had enough so I sat by the river and had a rest, I recon there will still be some around in a coupler weeks in other areas further up the valley so no hurry now I have my first batch.

Ok what was next oh that’s rite it was the nashi pears now they were definitely a surprise I was looking for a pear tree I got a glimpse of on my last trip out I found it but the wasps were at it and it was floury and dry, disappointing but as I went to turn away I seen the nashi, I don’t really love nashi’s but this one is beautiful firm and juicy. I had to beat my way through blackberries to get to the tree with a rake the only thing I had in the car! The tree itself was on the edge of a cliff to so had to be careful, I got a good basket full but payed for it with many scratches up and down my arms who said foraging was easy not me, but nothing truely good in life is easy is it!

I was stuffed after my battle with the blackberry but just up the road I seen a gorgeous apple tree and couldn’t pass it up the birds would have pollished them off by the next time I come out again so I picked a basket of them. a little way more down the road the Horse chestnuts were everywhere on the side of the road, they aren’t hard to get as they are on the ground so I racked up a bucket of them as well, when I was younger I used to come pick these up for money with my mum, I didn’t know what they were doing with them I heard make up from someone, but wasn’t sure. I have driven past them for years and thought what a waste but didn’t know what to do with them so never picked them up  until now. I’m going to have a go at making detergents from them and maybe eat them too but again they are a food that needs special preparation as they have toxins in them, I will share what I learn about them as I go ok, and finally I was finished home…… 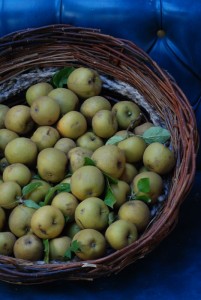 Mmmmmm not quite 1 kilometer from home I got a flash of bright red on the side of the road just on the edge of the pine forest surrounding my home I had to go investigate I just can’t help myself and it was a stunningly beautiful bright red fly agaric, now I know they are poisonous etc etc but that is a false statement and understanding of one of my favorite fungi, yes they contain toxins as a lot of foods do especially Australian bush foods if not prepared properly, fly agarics will make you sick and trip if eaten raw but there is a difference between deadly and toxic ok, it annoys me that all these years I just assumed they were deadly, I was told not to go near them as a kid but was fascinated with them I remember the drug squad came to town when when they first started appearing and kicked them all to scatter them, Only this year have I discovered that they are edible and have medicinal used too, I must stress they have to be prepared properly to be edible or they will make you sick! but I will not not share my experiences because the plant world PC crew don’t approve, I believe it is an injustice to blatantly lie about this valuable fungi.

I have eaten them now a few times and I love them, I will be utilizing them with pleasure for years to come.

I’m not suggesting people should copy me I am just sharing my experiences and thats all. I also hate fear mongers when it comes to wild foods and foraging as a life style I have been living off foraged foods for over 12 months now and intend to until I physically can’t so that is my rant on fungi and falsehoods and there will be more to come I’m sure.

I picked the first few that were out on the edge of the pine trees and was surprised when in a bit further next to the fly agarics where slippery jacks I haven’t seen them here this early before but wasn’t complaining but I was stuffed so I only grabbed a handfull of each and headed home finally, really, fully, tomorrow is another day.

I was really exhausted now but very satified at the same time, I just locked the car and dragged myself inside to eat and collapse into bed, I dreamt about all my goodies……… mmmmmmmmmm

In the morning I washed and froze the Hawthorns in two batches stuffed the fly agarics into a big bottle to ferment and then bagged the horse chestnuts and acorns, put them in the cupboard to deal with later.

Nearly mid day so time to visit my friend at her cafe and have a cuppa and share my goodies yah! I took B some of the apples and nashi pears she makes lovely cakes and really appreciates my little gifts in exchange for a cuppa here and there so we are both happy.

Back home I cooked up the slippery jacks for dinner and decided I had to go pick mushrooms tomorrow so with that I will I will end this post here and will post about the produce as I process them.
cheers